The motivation for creating this survey is the question of how software engineers prefer to start developing web applications in 2022. Flatlogic team started googling whether such studies had been done in the past, but surprisingly, apart from the generic SEO article on how to start a web app, nothing could be found.

Inspired by the State of JS and StackOverflow developer survey, we decided to conduct the world's first research on how developers start a web application.

We plan to perform this research every year to understand how developer preferences change from year to year.

Below you can find more insights about the technologies, frameworks, tools, platforms, and specific patterns that engineers follow to start web applications in 2022.

The survey was performed from April to May 2022. 191 participants from 31 countries participated in the study. The goal of this research was to identify patterns of modern web application development.

This section covers key findings of the study grouped by a category.

This survey consisted of 20 anonymous questions related to web development. 191 participants from 60 countries participated in the study. Statistical significance is 90%, and the margin of error is 6%. The survey was fielded from April 25 2022 to May 25, 2022.

We deliberately did not specify the type of web app in question, leaving the answer open. The responder may simply answer the questions just as if they were asked about their next web app.

Respondents were recruited primarily through channels owned by Flatlogic. The top sources of respondents were onsite messaging, blog posts, email lists, banner ads, and social media posts. We also asked for help to spread the word about research on other notable engineers in the web development world.

Some questions have open options just to give the opportunity to the respondents to give their perspectives in the questionnaire.

The questions were divided into numerous blocks, each with a different set of questions that were randomized in sequence. In addition, the sequence of the responses to the majority of the questions was randomized.

Here is the link to the original form where we have been collecting answers. Please note that the form with questions is no longer relevant and should not be filled out.

What we know about the community of web developers.

Most of the participants have at least a year of software development experience. The survey data also shows that a large number of those who took part in the survey have more than 5 years of experience. 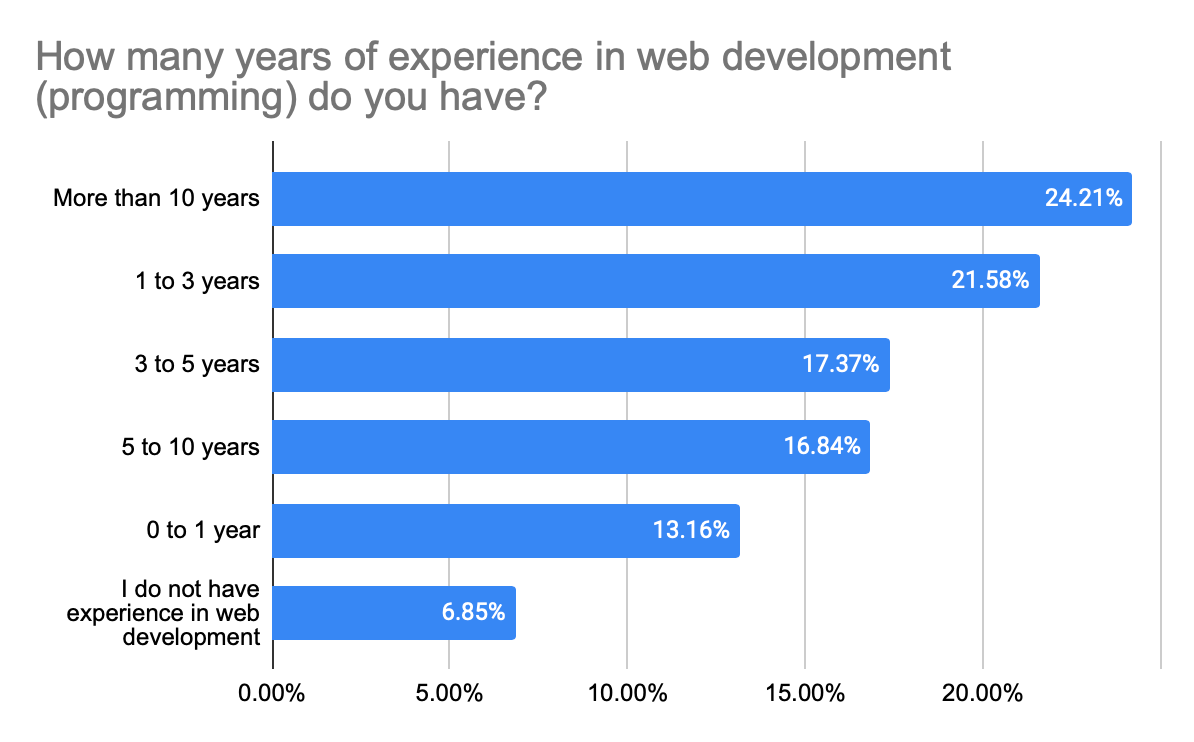 In total, developers from 60 countries participated in the study.

Learning how to code

It's hardly surprising that over 37% of respondents prefer learning web development using internet resources. Online classes, forums, and other online tools are popular among younger responders. On the other hand, older respondents learned through more traditional means such as school and books. The other interesting aspect is that some of the respondents marked actual programming as the source of learning. 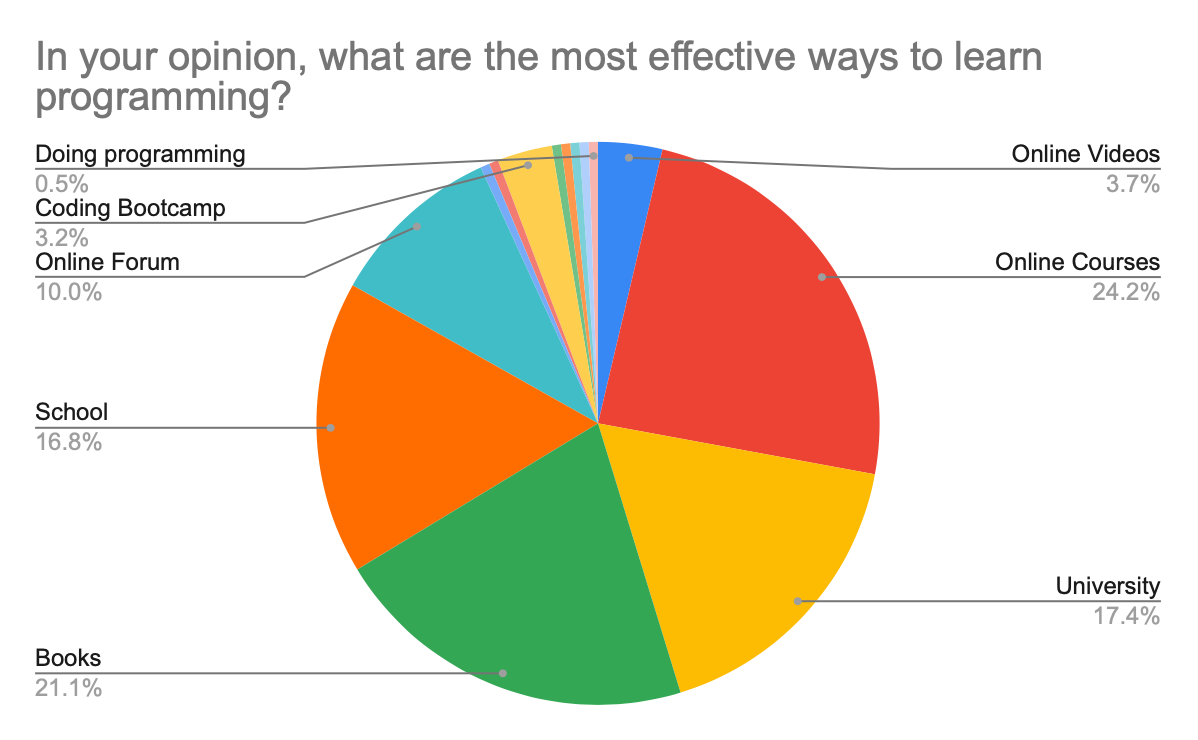 Let's also look at the relation between the source of learning and the experience of developers.

Most of the respondents would build a web application by writing the code. The number of developers who would use only no-code tools is still dramatically small - just over 6%. At the same time, we see that a fairly large group of engineers would combine 2 methods in building web applications.

Contrary to the high popularity of no-code/low-code tools (see the google trends screenshot) only 6.4% prefer to create web apps using no-code/low-code tools, while the majority 66% still prefer classical writing code. 22.3% would combine both methods and 4.8% resort to professional services. 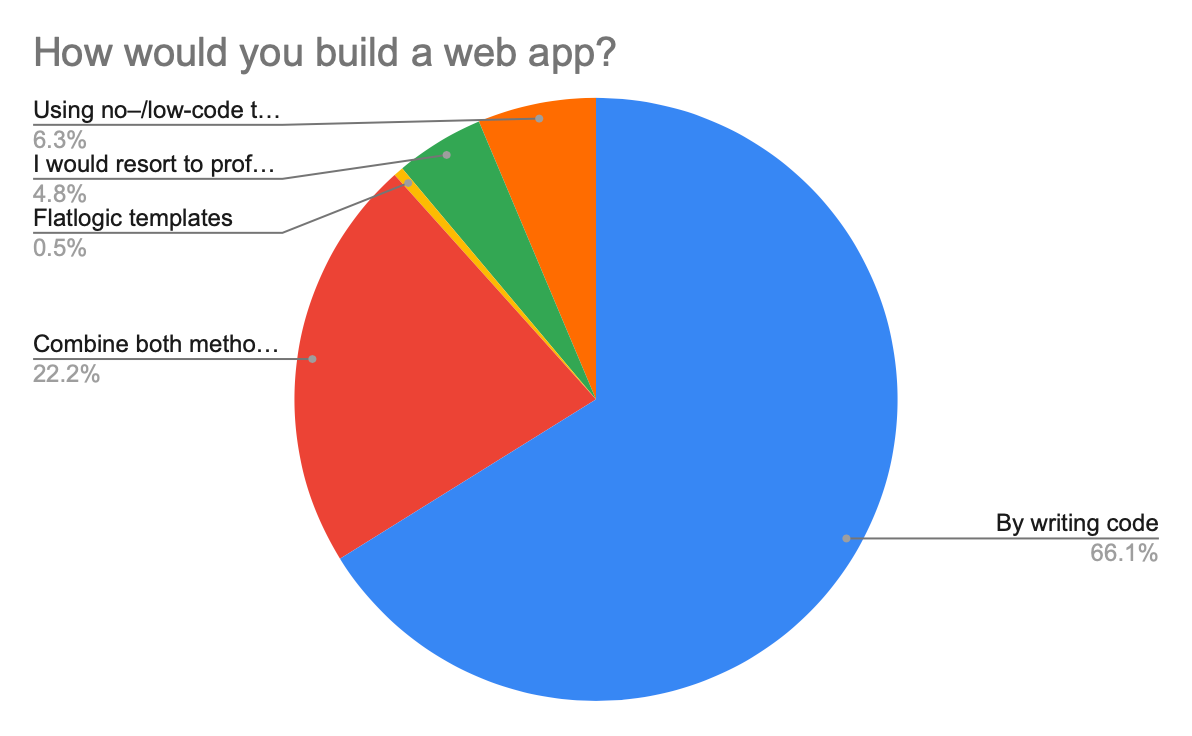 However, entry-level developers are most likely to choose no-code/low-code tools, only 45% prefer to write code.

Engineers with more than 10 years of experience - only 2% prefer no-code/low-code tools. 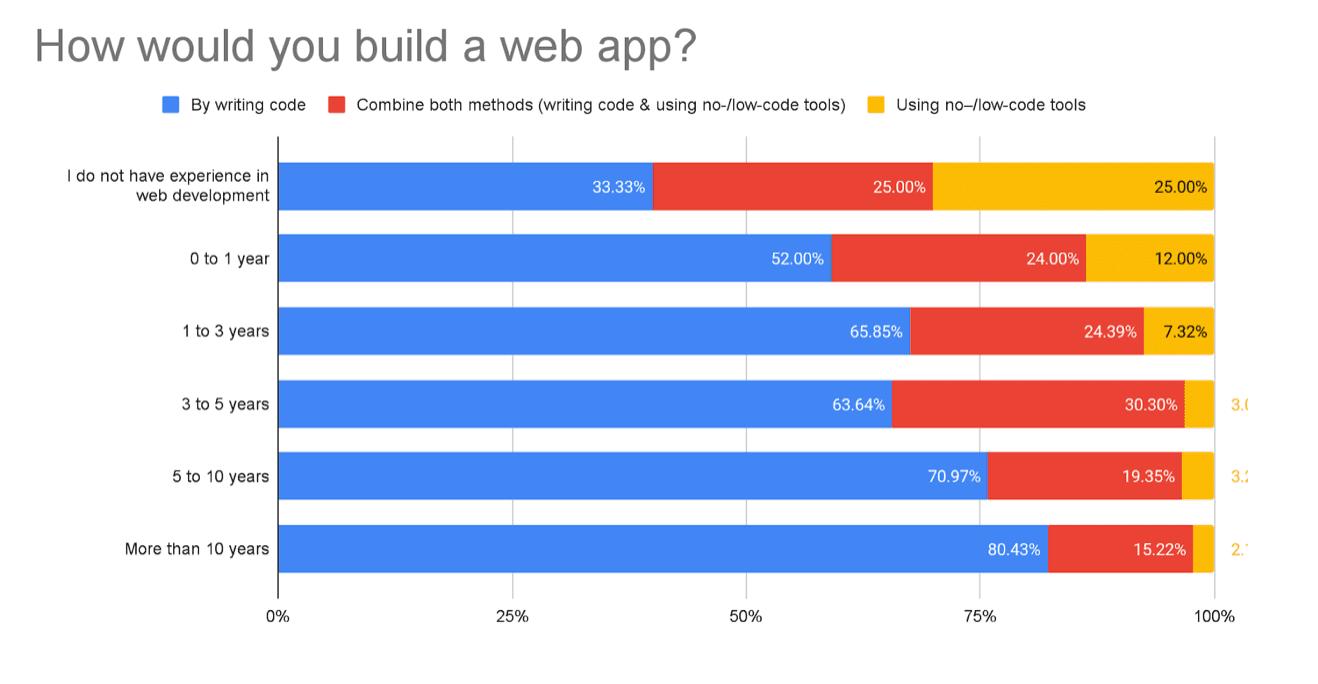 The vast majority of engineers - 72.7% - would use starter kits/boilerplates and other templates to build a web application. But only 14.1% would use paid solutions.

Hence, the conclusion is that the more experienced web developers are, the more likely they prefer to write code (old-school way) rather than then resort to Low/No-code tools. No-code/low-code tools are more popular among entry-level developers.

More experienced engineers, having more background do not see anything wrong with using templates to speed up the development. 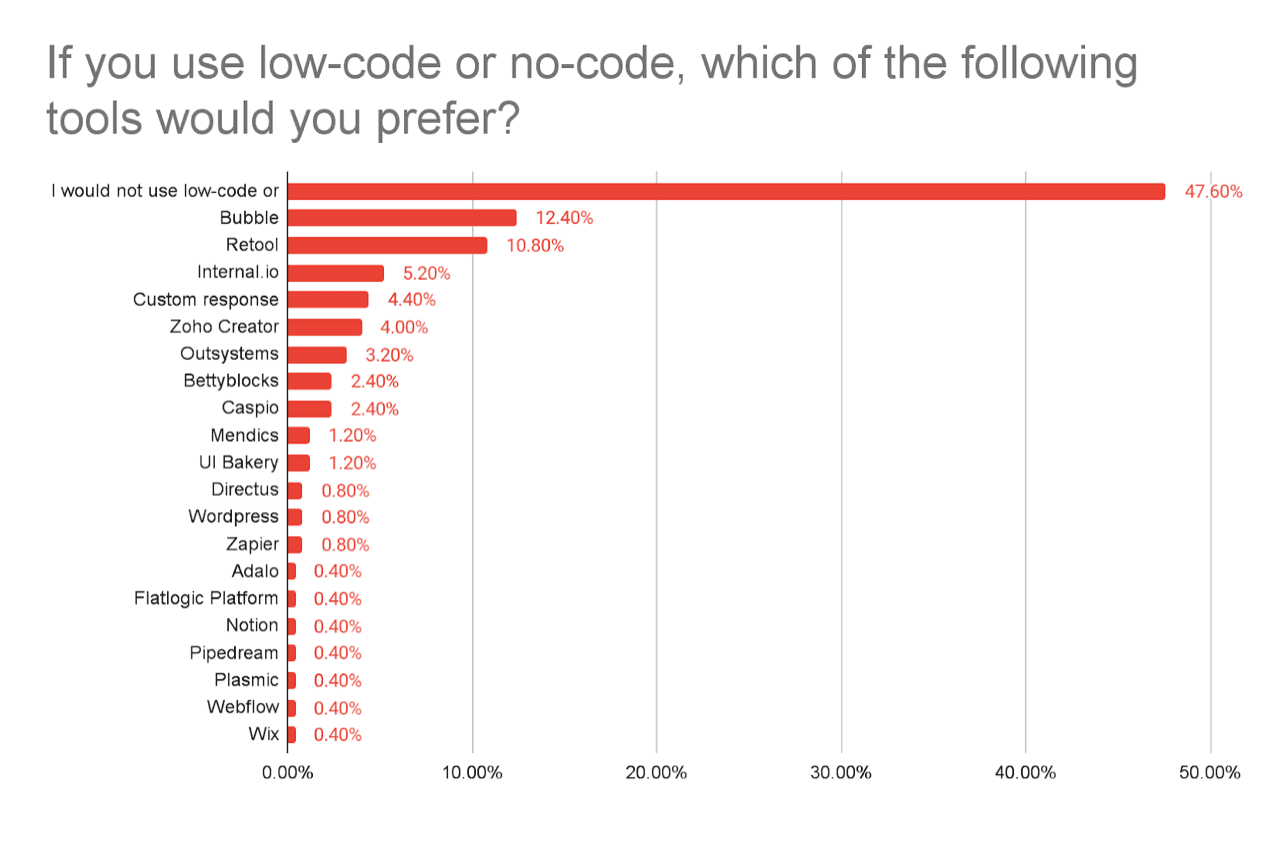 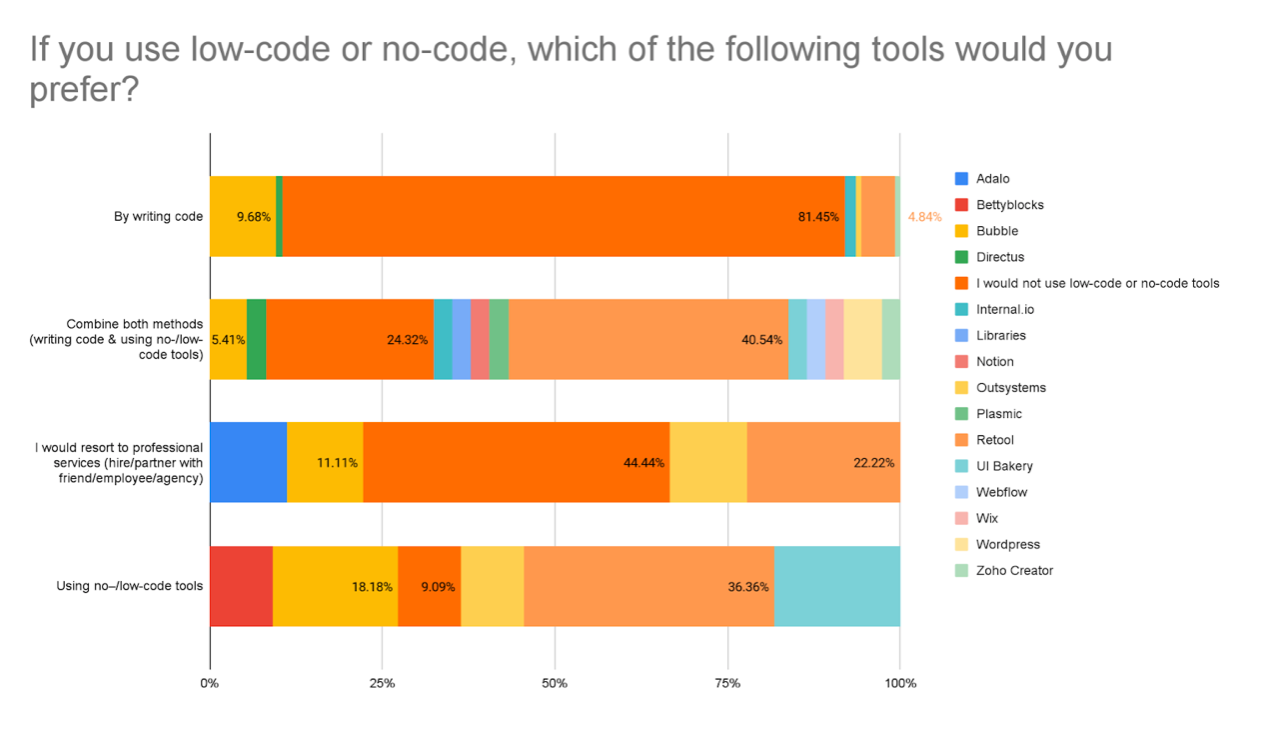 Preferences in no-code/low-code tools, depending on experience, are as follows.

In this section we wanted to know what technologies engineers prefer and actually use while developing web applications.

The first question was rather unusual and sounded as follows: "What technologies, frameworks, libraries, and tools related to Web Development do you use or plan to use?". You could choose multiple answers from 70 options. In this question, it was assumed that a person would very quickly choose the technologies that are closest and most familiar to him. Sort of identifying the most popular buzzwords among developers. As a result, Javascript, Node.js, and Npm were the most popular. 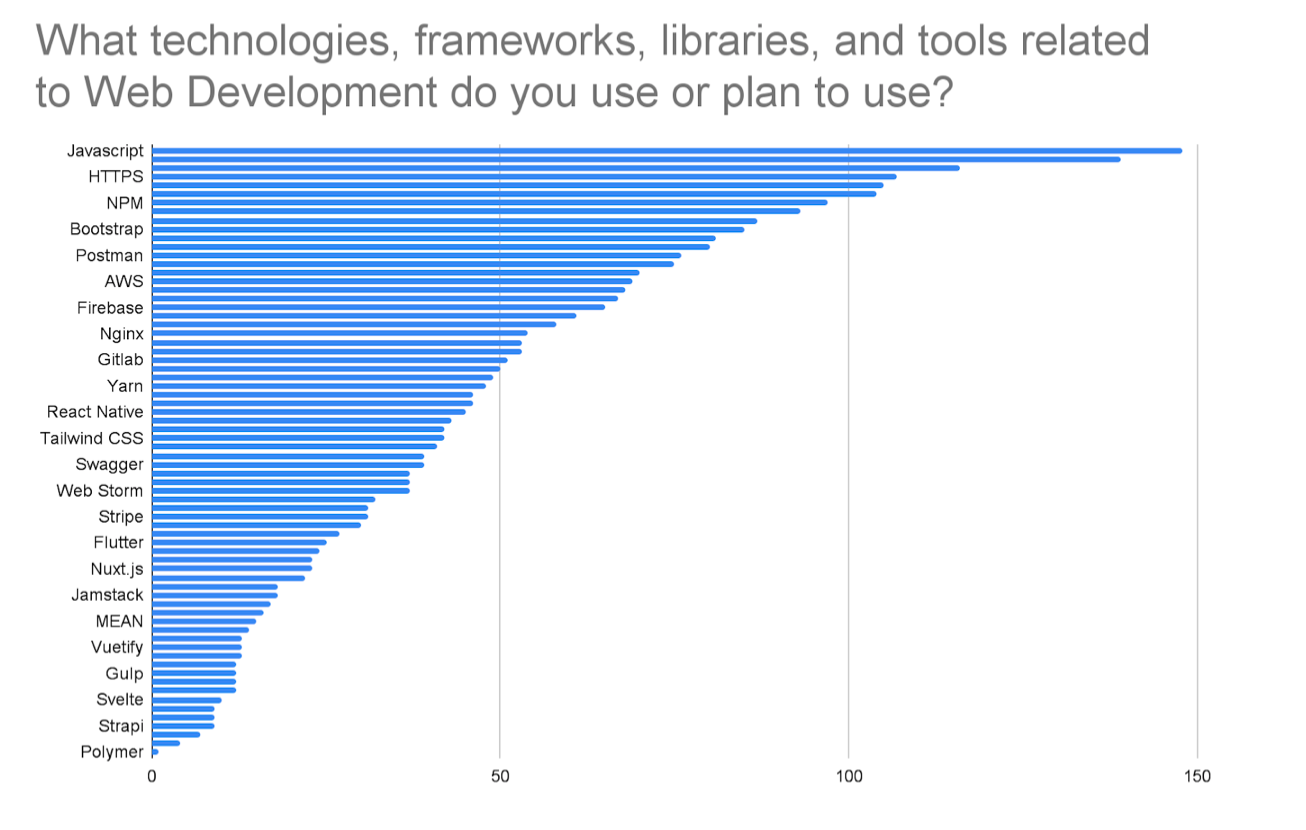 Here is also the word cloud for a better understanding of the results of the question. 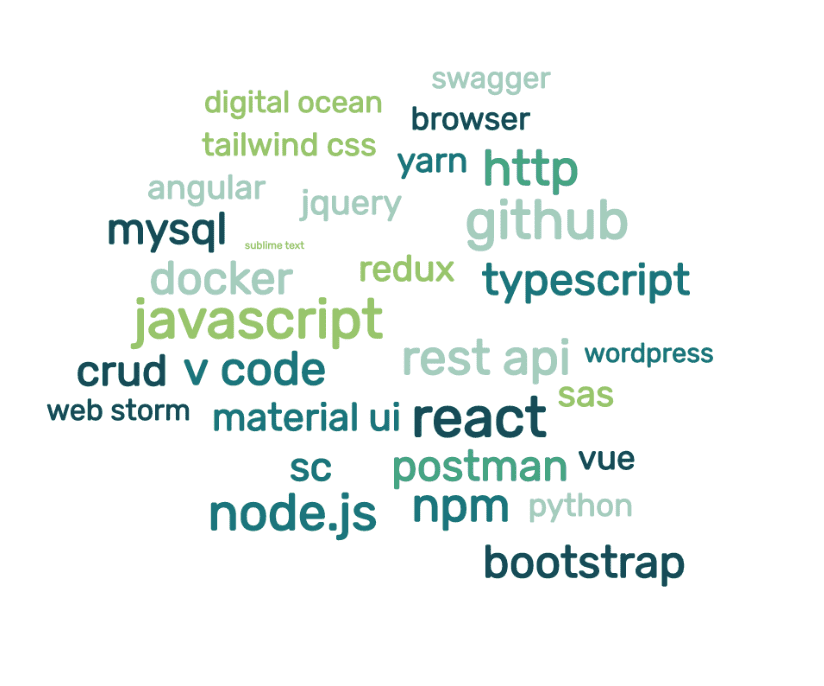 Word cloud of the popularity of web development technologies

React is expected to become the leader among front-end frameworks by a wide margin, and Vue is in second place. Angular is preferred by fewer developers. Which in general correlates with State of JS survey 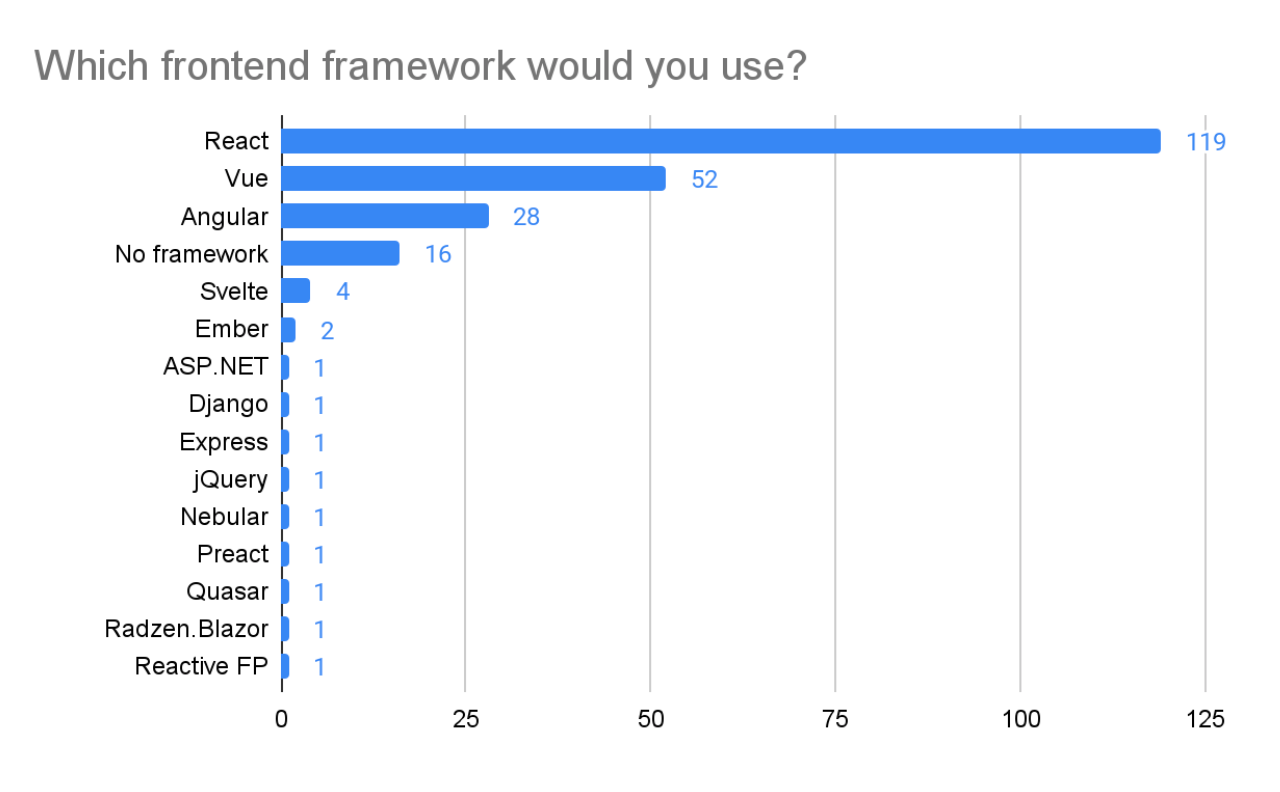 The popularity of technologies depends on work experience. React is most popular among inexperienced engineers, but in general, the deviation is not high.

Node.js is a leader among back-end technologies, PHP is in second place and Java is the third most popular. This is also not a surprise and correlates with other notable surveys. 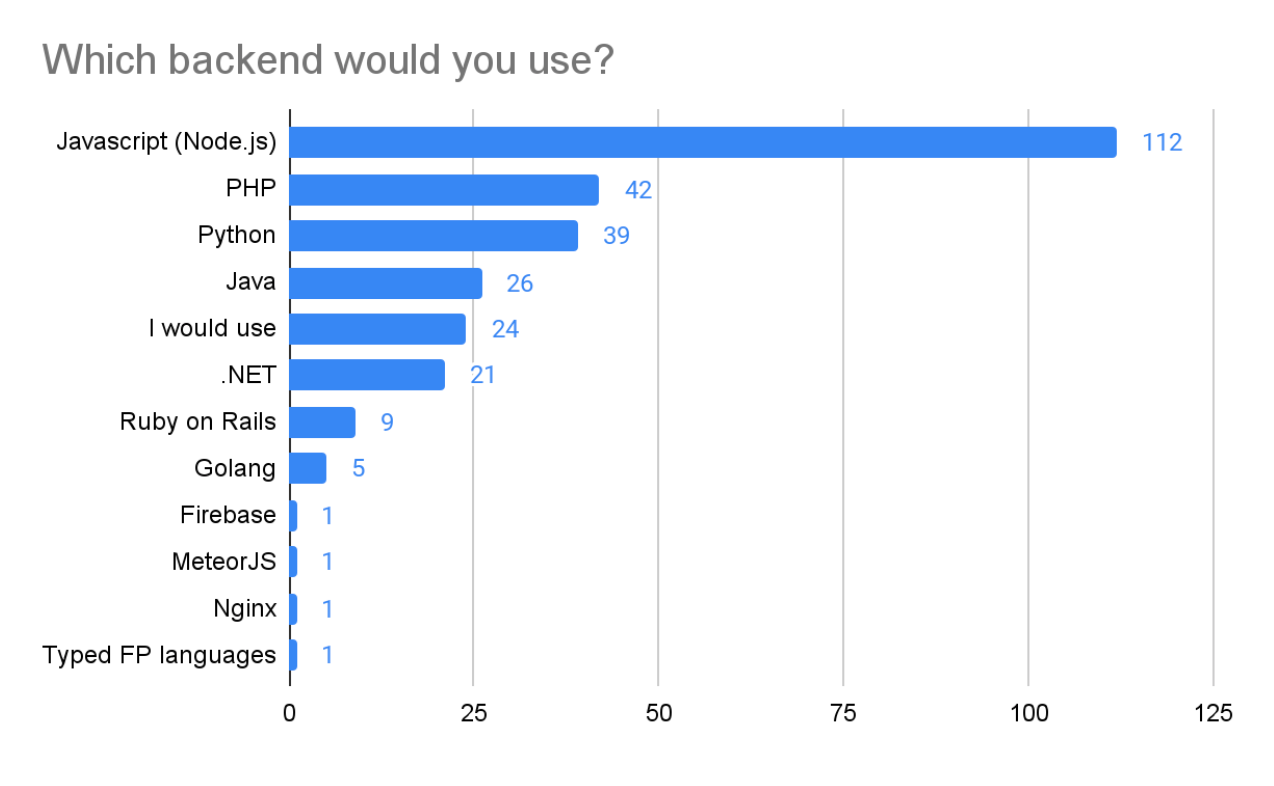 The next section of questions is related to storing and managing data.

The vast majority of engineers would manage the database themselves despite the growing popularity of headless cms and serverless solutions. Most of the developers want to manage databases by themselves and a small number of developers would use firebase or Strapi to manage their data.

Depends a lot on the use case. Both DB instance and headless CMS are valid

Depends on size of app and deadline date. For small MVP I'd use firebase

Additionally we see that there is no significant correlation between the experience and the method of managing data. The majority of engineers in each group would choose to manage the database by themselves.

Relational databases are the most popular choice among web developers of all experiences. It is interesting that more experienced developers are choosing PostgreSQL instead of MySQL. MongoDB is less popular among experienced engineers, despite the fact that it is quite fashionable. 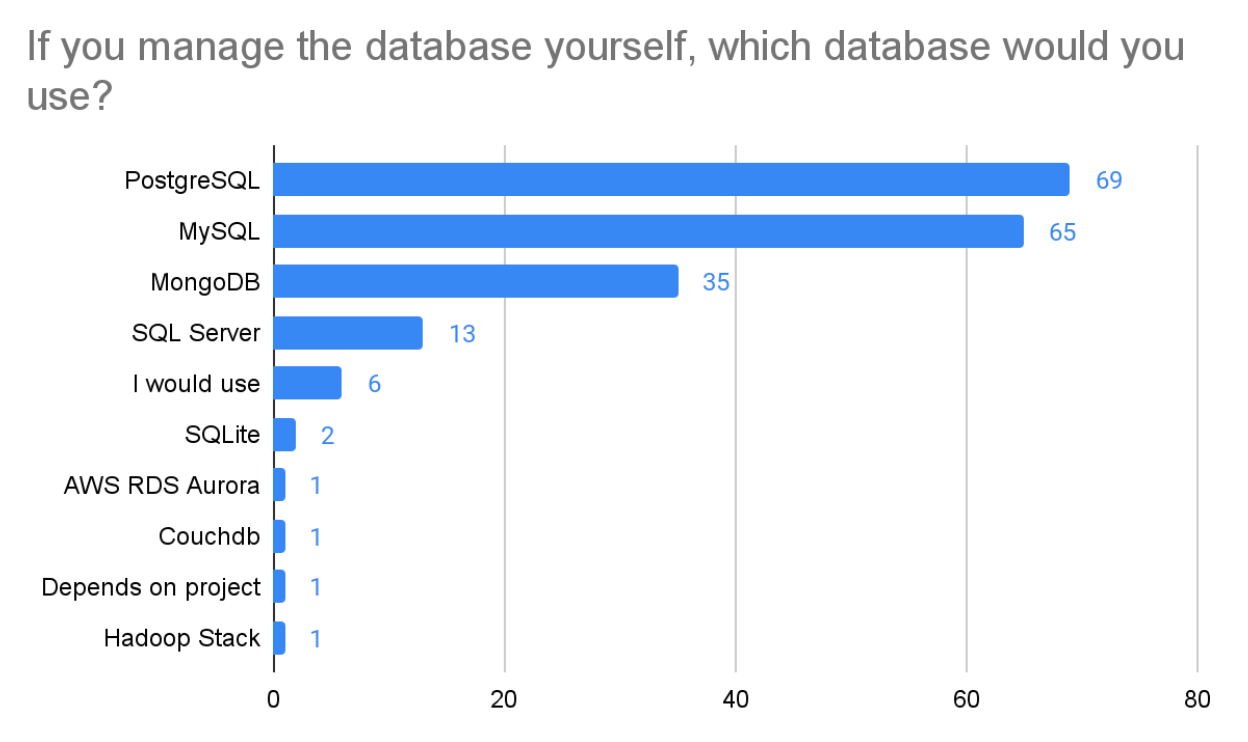 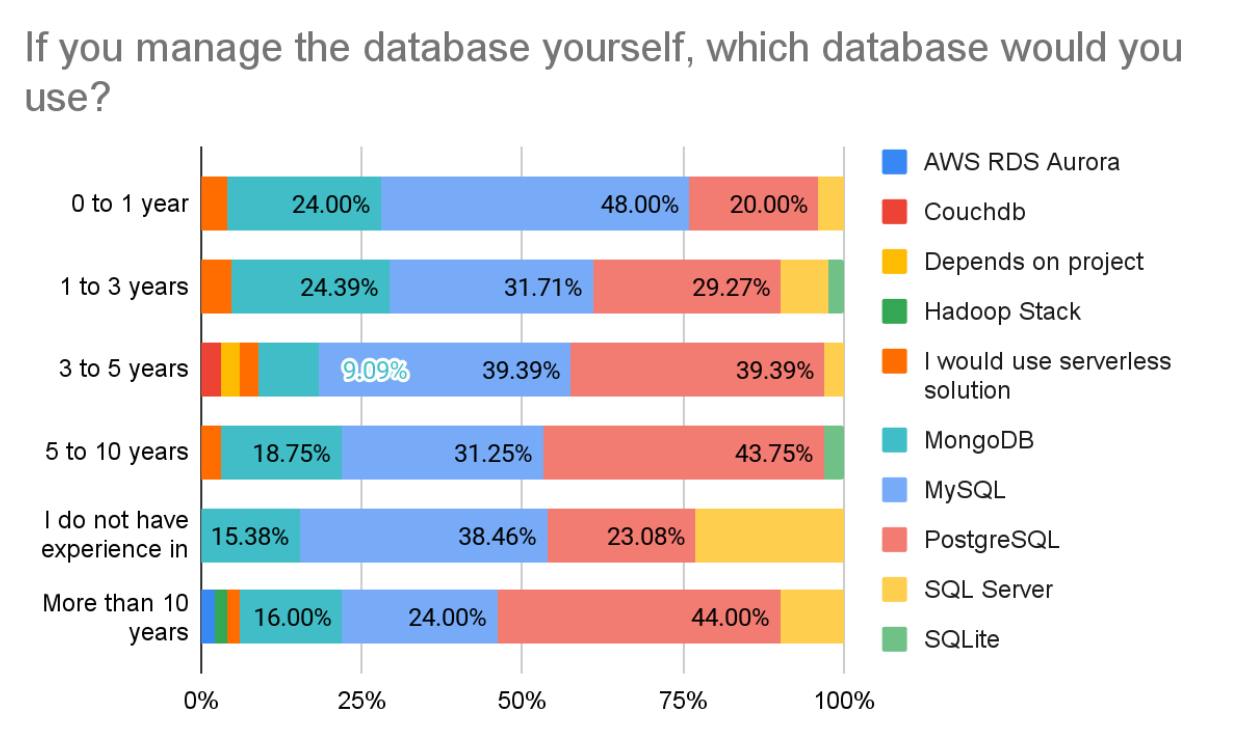 We also see the correlation of choice between front-end and back-end technologies. The engineers that use React are more likely to choose node.js as a back-end solution. Vue engineers also prefer to choose PHP and Angular love .NET back-end. But overall node.js is the most preferred choice.

We see also that engineers which use Node.js as a backend use all the major DB equally. Ruby on Rails users uses only Postgres as it comes as a standard for this back-end. PHP users tend to use MySQL because it is a traditional choice in the PHP web development market. 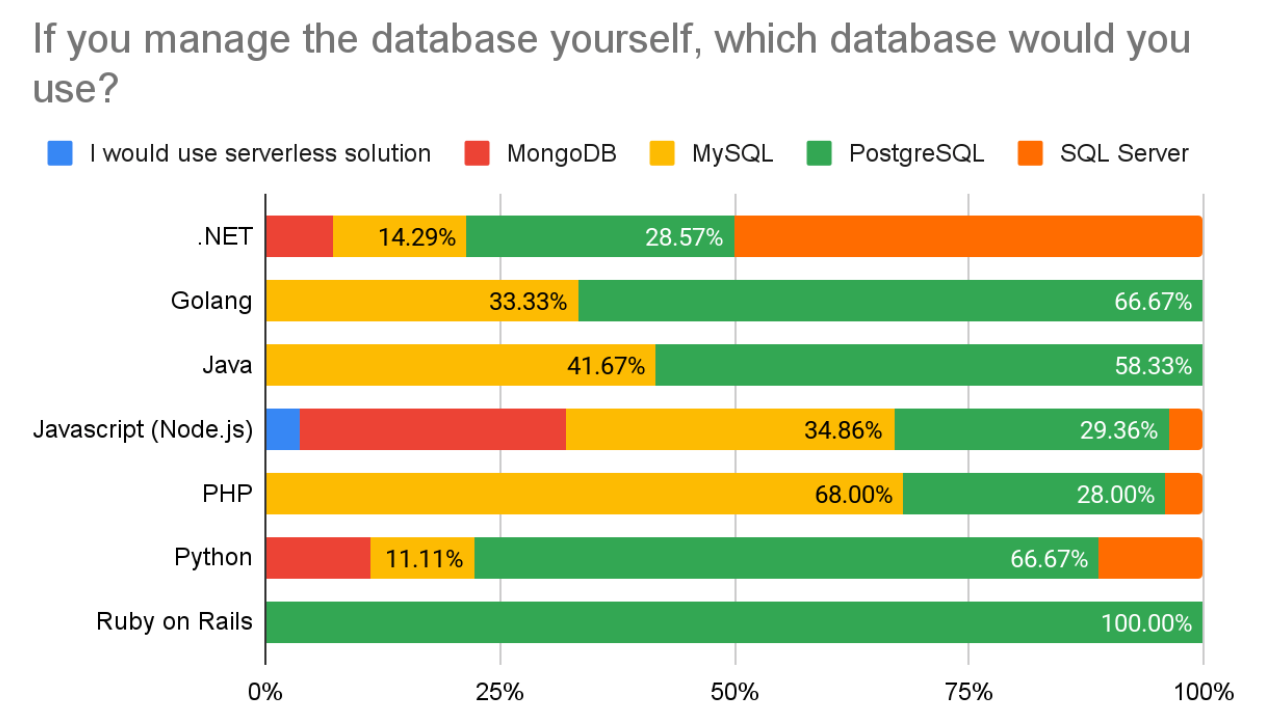 From this section of the analysis, we generally reaffirmed traditional technology preferences in the industry.

As for hosting, everything turned out to be without surprises. Amazon AWS is the leader. Moreover, it is in line with other surveys on the market.

77% of respondents are not using scaffolding tools like Yeomen, Rails scaffolder, and others.

There is no significant correlation between experience and preference to use code generation tools. However, engineers with 5 to 10 years of experience use scaffolding tools more widely. 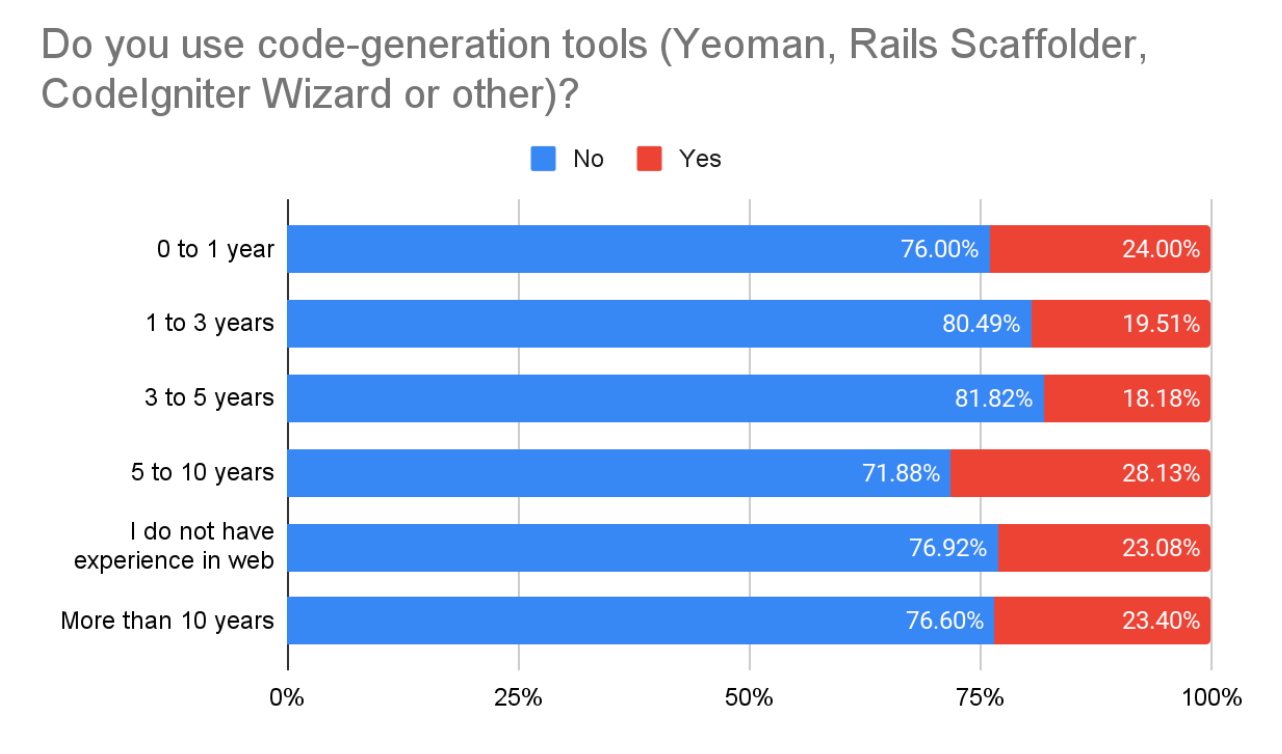 Most engineers prefer GitHub for code hosting and management. There was also one custom answer that the developer would use his own servers. 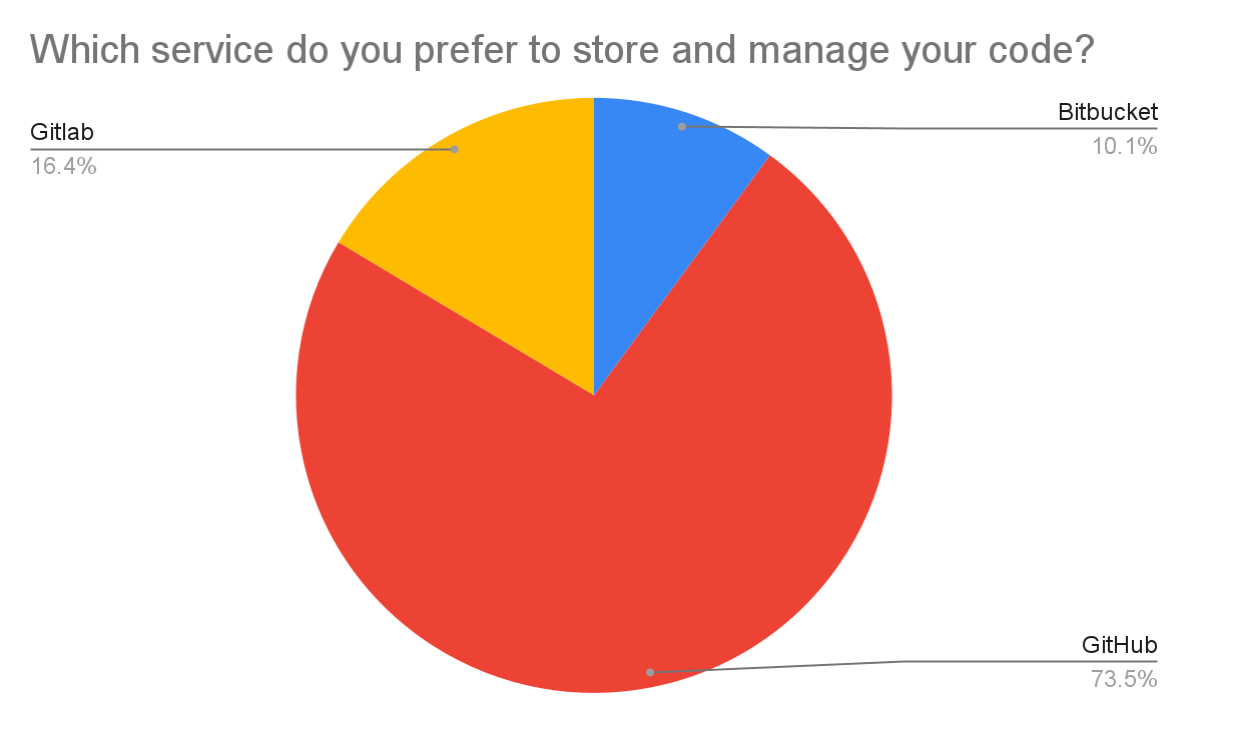 More than 80% of engineers prefer to use REST API while starting a web application. And 1 answer that the user would not use API. 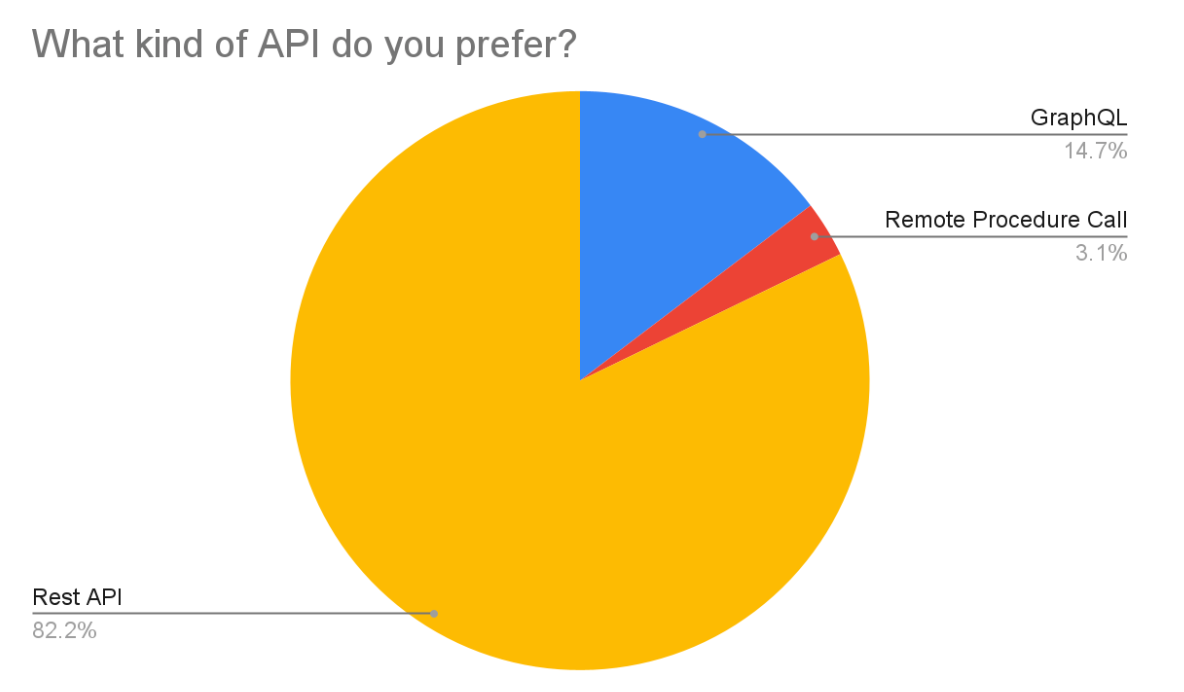 Most of the engineers still use Bootstrap as the preferred CSS/components library. Material-UI is the second most popular and Tailwind is the third. 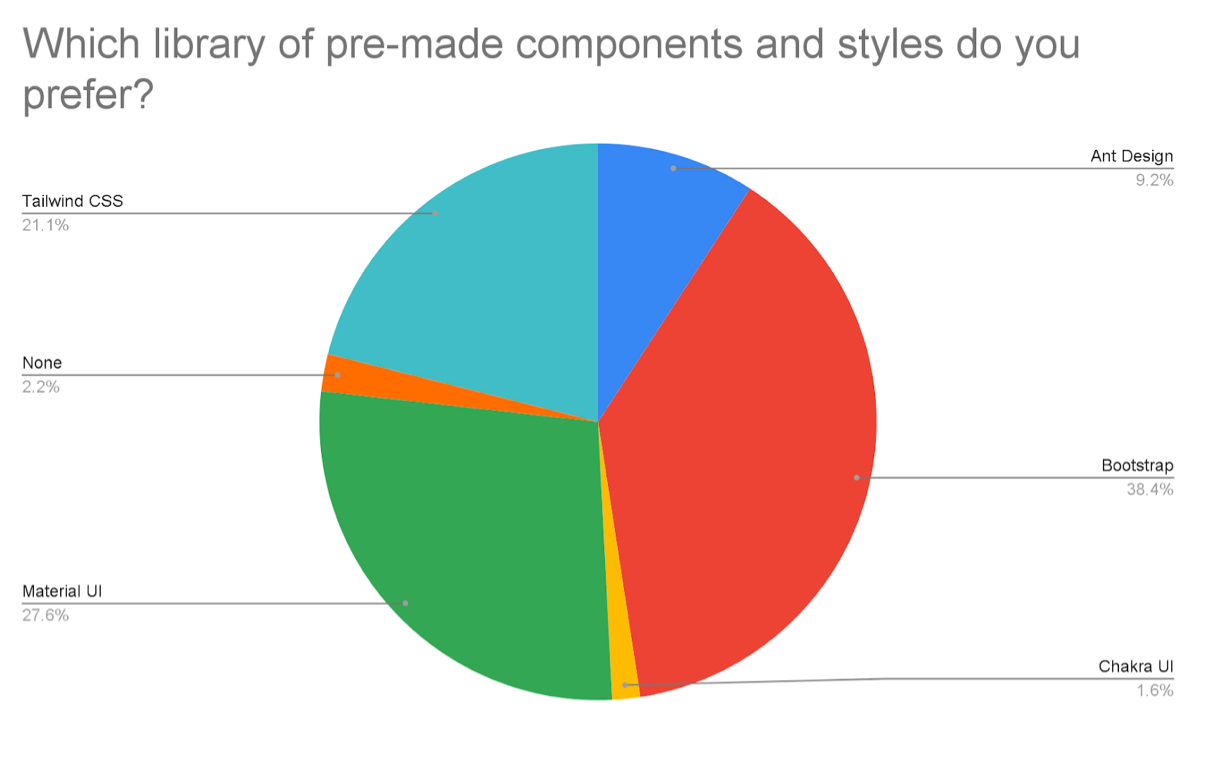 Following section of questions was related to third-party code price and purchasing.

The majority of the web engineers would purchase third-party code if this speed up the development process. 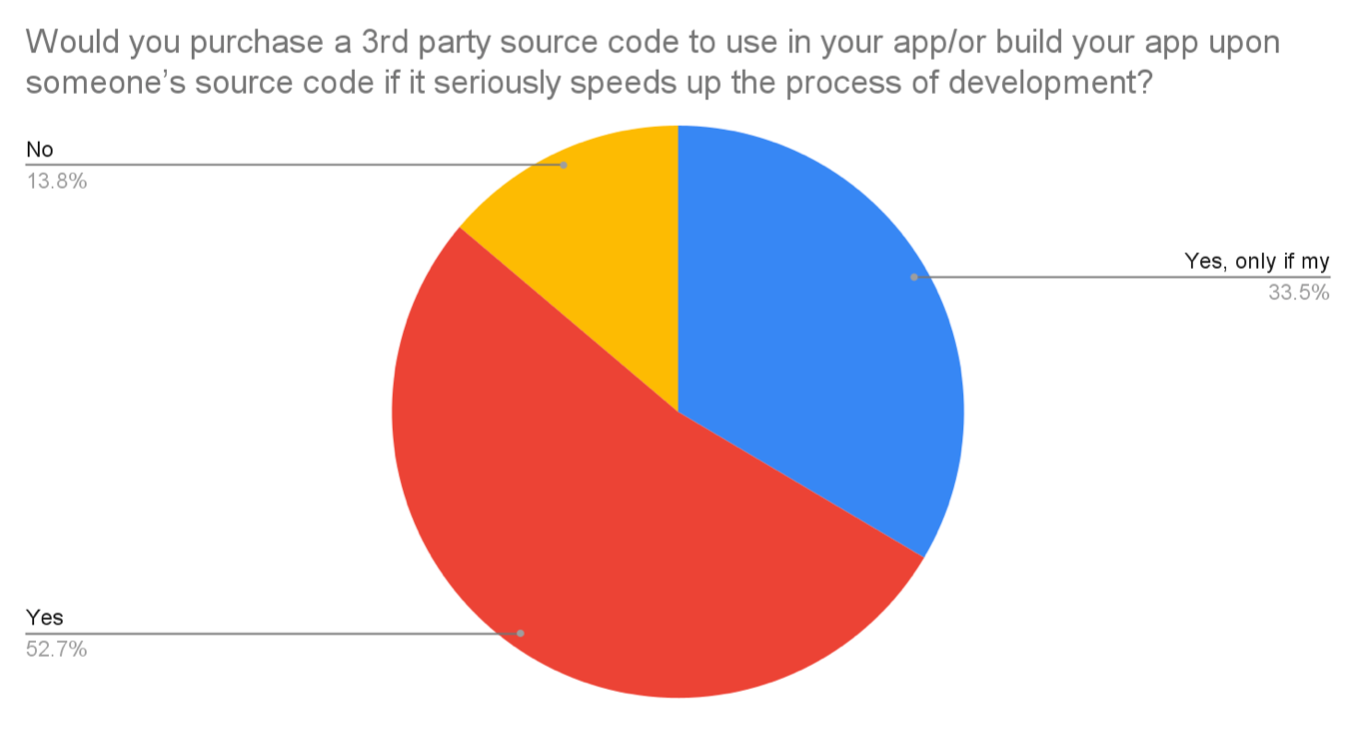 Engineers with 1 to 10 years of experience are more likely to purchase third-party code for creating web applications. 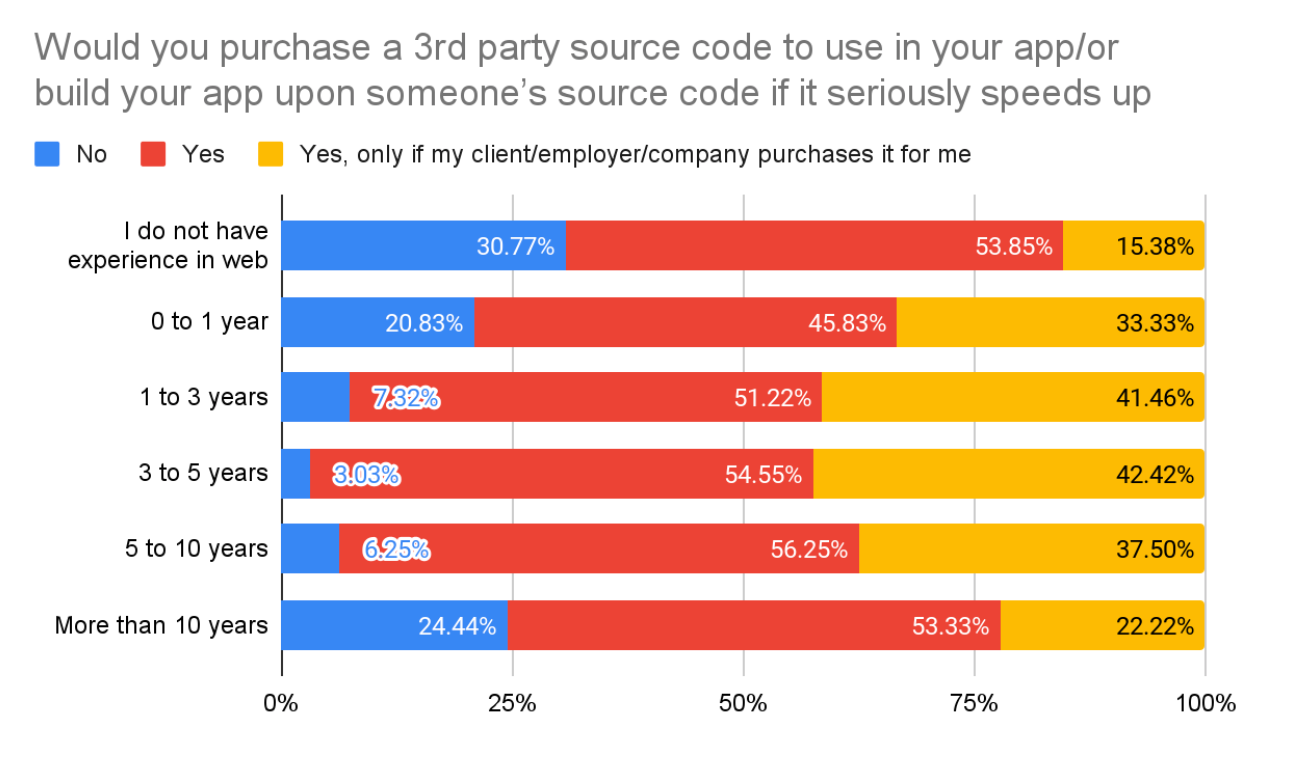 The answers to the question of how much you would spend on third-party code were directly proportional to the price options. The lower the price, the more responses were in this category. However first three options were divided equally.

Experienced developers can spend more on purchasing third-party code. We assume it is because they know the real value of it. They are also more likely to make a purchase no matter what is the price.

Engineers are more likely to spend money on one-time purchases than on SaaS tools.

The main conclusion of this study is that the use of certain technologies in the development of web applications directly depends on the experience of engineers. Developers with less experience tend to like new technologies more such as no-code/low-code solutions, GraphQL and non-relational databases.

Engineers with less experience tend to get knowledge from online sources, while developers with more experience in software development prefer to use more traditional methods in obtaining new knowledge such as books, etc. Retool and Bubble are the leaders by popularity among no-code/low-code.

The most popular web application development stack is React, Node.js, PostgreSQL, Amazon AWS, and bootstrap, which correlates with other surveys in the industry. Most engineers prefer to manage the database themselves rather than using headless cms or serverless solutions. Engineers with more than 5 years of software development experience tend to spend more on third-party code and saas tools if this speeds up the development process.

We plan to perform another study in a year from now, since it is really important to evaluate the results in dynamics. Particularly it is not clear whether no-code/low-code tools will still hold the same level of popularity among more experienced engineers or it will grow due to the fact that those who are entry-level engineers now will keep using those no-code/low-code tools throughout their careers.

In general, at the moment it seems like “fashionable” tools like low-code/no-code platforms, MongoDB, GraphQL are only fashionable - most engineers, specifically experienced ones prefer to use traditional and fundamental analogues: writing code, using relational databases, REST API respectively. However, this statement needs to be tested in a year from now to evaluate the dynamics.

If you have some suggestions, questions or critics - feel free to leave your comments in the special forum post dedicated to this matter! We are open for discussion and feedback.

If you need raw data - please contact us at [email protected], we will be happy to share!